All models are wrong, but some are useful.

The above quote is also nicely exemplified by this xkcd comic: 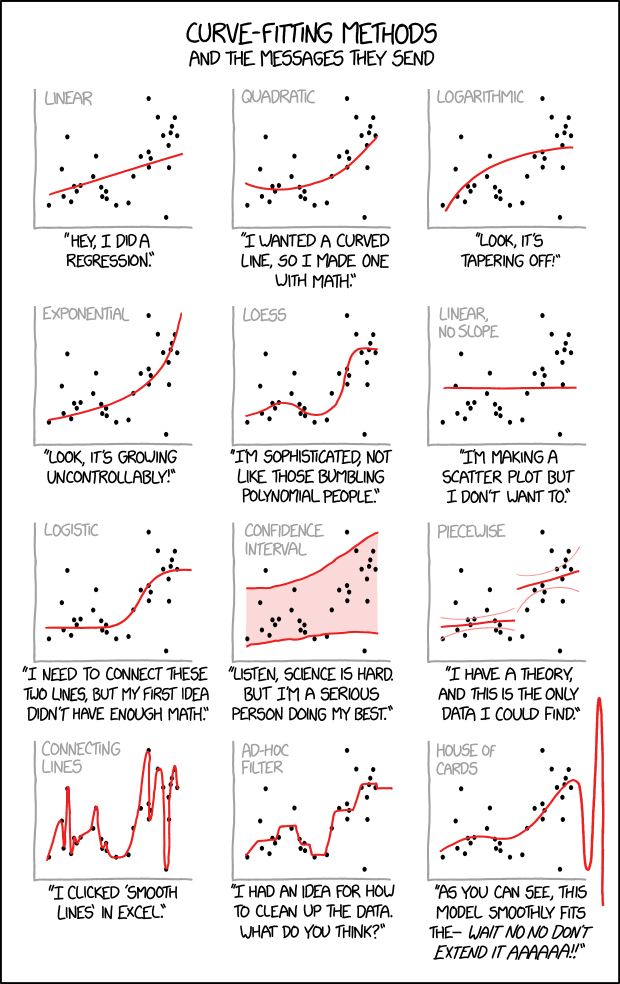 A supervised learning model tries to infer the relationship between some inputs and outputs from the given exemplary data points. What kind of relation will be found is largely determined by the chosen model type and its internal optimization algorithm, however, there is a lot we can (and should) do to make sure what the algorithm comes up with is not blatantly wrong.

What do we want?

What can go wrong?

Below you find a quick summary of what you can do to avoid these pitfalls and we’ll discuss most these points in more detail in the following sections.

Before training a model
After the model was trained

Please note that these steps represent an iterative workflow, i.e., after training some model and analyzing its performance one often goes back to the beginning and, e.g., selects different features or tries a more complex model to improve the performance.

And after the model was deployed…​

One of the biggest problems in practice: Data and Concept Drifts:
The model performance quickly decays when the distribution of the data used for training \(P_{train}(y, X)\) is different from the data the model encounters in production \(P_{prod}(y, X)\). Such a discrepancy can be due to

Example: From the production settings incl. the size of a produced part (\(X\)) we want to predict whether the part is scrap or okay (\(y\)):

Mitigation Strategies:
The best way to counteract data and concept drifts is to frequently retrain the model on new data. This can either happen on a schedule (e.g., every weekend, depending on how quickly the data changes) or when your monitoring system (see below) raises an alert because it detected drifts in the inputs or a deteriorating model performance.
Data drifts can be seen as an opportunity to extend the training set with more diverse samples. Concept drifts, on the other hand, entail the need to remove samples from the original training set that do not conform to the novel input/output relation before retraining the model. While traditional ML models typically need to be retrained from scratch, neural network models can also be fine-tuned on newly collected data, however, this is only useful when faced with minor data drifts, not drastic concept drifts.
Additionally, known changes can also be included in the model as additional features (e.g., seasons).

Possible components of a monitoring system:

These checks can be combined with a sliding window approach, for example, every hour the data collected in the last 48 hours is compared to the training data. If any of the monitoring values exceed some predefined threshold, the system triggers an alert.

← Previous: Kernel Methods | ↑ Up: A Practitioner’s Guide to Machine Learning | Next: Model does not generalize →